BIOMIMESYS® Brain represents a new generation of mimetic hydroscaffold for 3D neuronal cell cultures. Available in a ready-to-use format, it enables the long-term culture of neuronal cells by mimicking the components of brain ECM and the physiological conditions that are representative of the microenvironment found in the brain. The highly porous nature of the scaffold allows the rapid uptake of nutrients, oxygen, etc. into the cells to create a reproducible study model for all downstream analyses used with 3D neuronal cells.

3D neuronal cell culture model can better mimic tissue structure and cellular interactions than 2D.
BIOMIMESYS® Brain provides a compelling model for in vitro studies of complex neuronal diseases such as Parkinson’s or Alzheimer’s disease, for neurotoxicity or neuroprotection assays.
• 3D culture with biomimicking hydroscaffold is ideal for pharmaceutical research in testing the efficacy or toxicity of the target molecules with neuronal systems.
• Ability to include different cellular types like neurons and astrocytes, ECM and microenvironment. For example, astrocytes can alter the response to drugs (Gupta et al. 2012).
• Represent the spatiotemporal context of the original tissue, allowing the establishment of biologically-relevant cell-cell and cell-ECM interactions.
Results using BIOMIMESYS® Brain
• SH-SY5Y (adrenergic cells commonly used for pharmaceutical research) and LUHMES (Lund Human Mesencephalic, human embryonic neuronal precursor, dopaminergic cells) has been tested.
• Neurons grow and form neurites in “neural sphere” version. They formed spheroids, with intra and inter-spheroid neurites or networks if cultured in “neural network” version with more porous and lower elastic modulus.
• Cells lived longer than in 2D culture (3 weeks vs. 4-5 days). Thus testing the chronic effects of pharmaceutical products on the brain and neuronal systems with BIOMIMESYS is the most rational choice.
A1 – A3: LUHMES cells seeded in BIOMIMESYS Brain (Neurosphere) at 20x104 cell/well, 6, 13 and 20 days after seeding. At day 20 the neurospheres stopped growing in size, then started forming neurites (green fiber). B: LUHMES cells cultured in higher porosity BIOMIMESYS Brain (Neural Network), neural cells dispersed better to form cell network instead of spheroids. BIOMIMESYS Brain showed structural differences from monolayer culture (C). Cells were stained with Hoechst (blue) for nuclei and for β3-tubulin (green).
Applications for BIOMIMESYS® Brain
There are different responses between 2D and BIOMIMESYS to rotenone neurotoxicity on LUHMES cells.
Rotenone is thought to be an inducer of Parkinson’s disease. The dose-dependent effect was tested on dopaminergic neurons (LUHMES cell line) in BIOMIMESYS and compared to a typical 2D culture.
Depending of the mechanism of action of the drug, 3D culture does not always require higher dose (as shown in adipocyte flyer). In this scenario, LUHMES cells required less rotenone in 3D than in 2D to shown neurotoxicity. 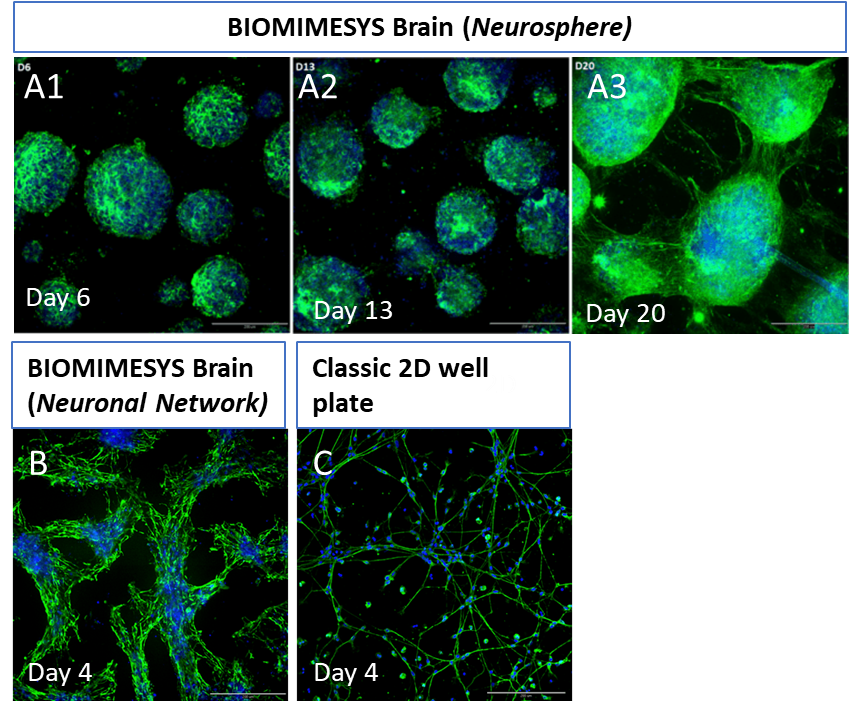 LUHMES cells were treated with rotenone in various concentrations. Number of cells as viability and neurite outgrowth were used as a parameter of neurotoxicity. The neurotoxicity of rotenone was shown on the size and ability to form neurites, but it did not seem to have effect on the cell nucleus. As shown in this figure LUHMES cells in 3D showed less neurites at lower concentration than cultured in 2D. Cells were stained with Hoechst (blue) for nuclei and for β3-tubulin (green).
Future Plans
Apart from toxicity studies, iPSC-derived neuronal cells are of great interest in pathophysiological studies (e.g. neurodegenerative diseases). Primary cells and induced pluripotent stem cells (iPSCs) in this hydroscaffold will be tested soon.
BIOMIMESYS® Brain could be used to develop healthy or pathological models , which will be more relevant than existing monolayer models, by including the cellular micro environment.
The ability of drug candidates to reach the brain should also be considered. In this aim we are also developing a human blood-brain barrier model and microfluidic systems to mimic at best the different brain compartments.

FOR RESEARCH USE ONLY, NOT FOR USE IN DIAGNOSTIC PROCEDURES.
Manufactured by : HCS Pharma 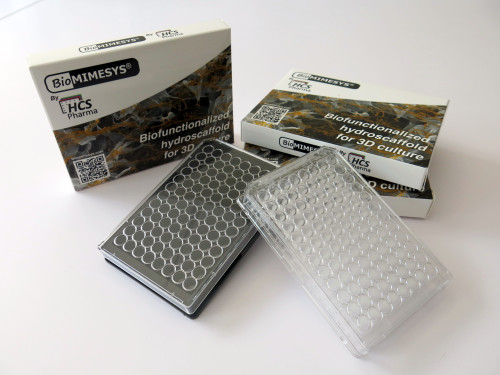